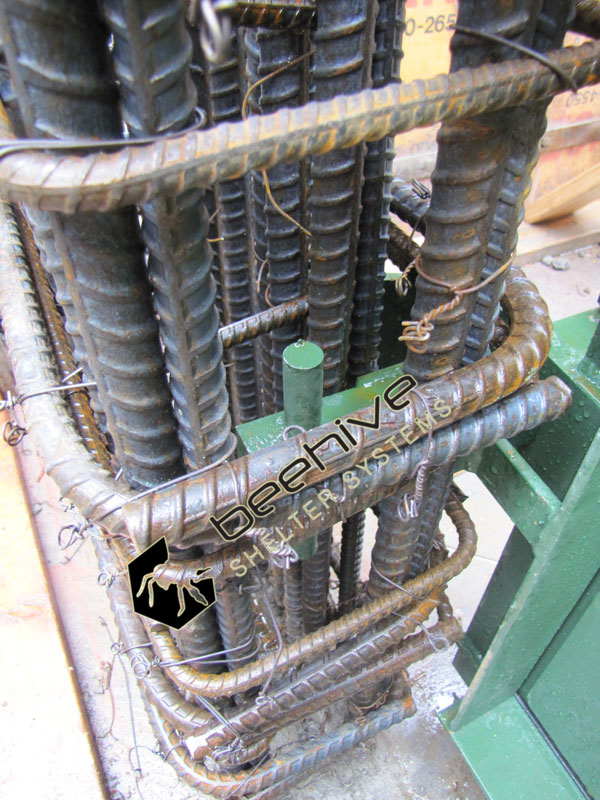 copyright 2013 – All material contained within this document is copyrighted by Beehive Shelter Systems and shall NOT be copied, re-written or plagiarized in any fashion without written permission from the Author.

the critical decision process of BUNKER design one must make SMART CHOICES based upon SOUND FACTS.  We have prepared a few of the most critical discussions in this decision process and will try to bring to light what we feel are the most salient points.

A. – Why build a private BUNKER?

ANSWER: – Due to the fact that you are investigating this website leads us to believe that you see and understand the critical nature of protection and survival for your associates.  We will not delve into why you need a BUNKER, but rather why you need a private BUNKER.  There are many websites and companies that are currently promoting a group “CONDO” style bunker where you pay for the right to come and stay during an event.  This theory sounds great at the beginning but there are a few MAJOR FLAWS.  1) Transportation: During any event there will always be transportation problems.  We saw this in the events following 9-11 and other regional events that draw large groups together in an evacuation scenario.  Under many of these conditions the highways, airports and stations are jammed with people who are all intent on getting away as fast as possible.  In certain conditions like an EMP event, most vehicles with any electronics will be permanently disabled causing massive population build ups attempting to evacuate.  The thought that you can drive or fly to your private BUNKER condo is not sound and will leave you exposed out in the open during the most perilous time of the event.  IN CONTRAST,  a privately 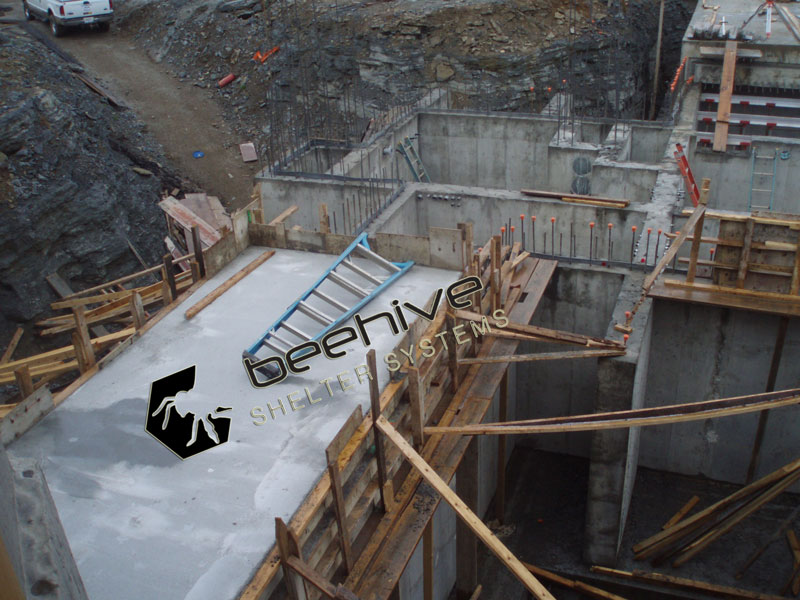 owned and covertly located BUNKER adjoining your property will allow you to quietly and safely enter and lock down while others are scrambling for safety.  2) Covertness:  Have you wondered how the global advertisement of these CONDO bunkers will dilute their security.  The first form of security is covertness and the broad exposure of these condo bunkers before, during and after any type of event will make them a huge target for the general populace.  Individuals will go to great lengths to find and secure any provisions that will keep them alive and these targets will be widely known to the general population. IN CONTRAST, a privately owned and covertly built BUNKER will maintain the anonymity of your location and by what means you will be maintaing your existence.  Remember “BEING COVERT IS YOUR BEST FORM OF SURVIVAL”.  A small privately owned BUNKER with less provisions is far better than a lavish retreat that is a target by other desperate individuals.

B. Why a concrete BUNKER over a steel bunker?

ANSWER: – We recognize steel bunkers as an efficient and cost effective way of securing your safety and survival provisions.  We have worked with a company called Utah Shelter Systems for years and recognize them as a global leader in steel tube BUNKER systems.  These units are affordable, efficient and relatively easy to install and can provide years of maintenance free operations.  One of the owners of Utah Shelter Systems, Sharon Packer has worked with our group and is a part of our consulting team.  There are limiting factors with steel bunkers that cannot be matched to a concrete BUNKER.  Concrete bunkers can be designed in countless configurations and can be installed directly under major load bearing facilities.  Concrete is non-corrosive and can last for centuries without any degradation to the structure.  Concrete has natural radioactive dampening properties and will respond to a major blast as a single entity.  Concrete BUNKERs can be designed in a way that will simulate a normal living condition with higher ceiling lines and square room corners.  Concrete BUNKERs were developed during World War II and many of these structures are still in good condition today.  Concrete is a proven material that has been used for over 1000 years in soil corrosive environments.  In the final analysis, steel is a fabulous material to use but does not carry the unique properties that sets CONCRETE far above the pack.

C. What is the difference between (Custom) versus (Pre-Fab) BUNKERs.

ANSWER: – Over the past twelve years as we have been involved in many “custom” BUNKER projects we have recognized the “out of reach” price tag for these types of facilities for most individuals.  These projects can range from $600 / square foot to over $2,000 / square foot and will drive most individuals out of the concert BUNKER market.  In an effort to re-capture this medium market we have developed and patented a “prefab” concrete BUNKER system.  Our Pre-fab BUNKERs utilize a patented system that “locks” in all components together into a singular shell design.  This design saves on materials and time and creates a more cost effective unit.  For more information see the BUNKER (pre-fab) tab at the title page.  Custom BUNKERs allow unlimited flexibility and strength of bearing, but with a higher price tag and more visual exposure to the site.  Pre-Fab BUNKERs are more limiting in shape and load bearing capacity but save on time, money and visual exposure to the job site. 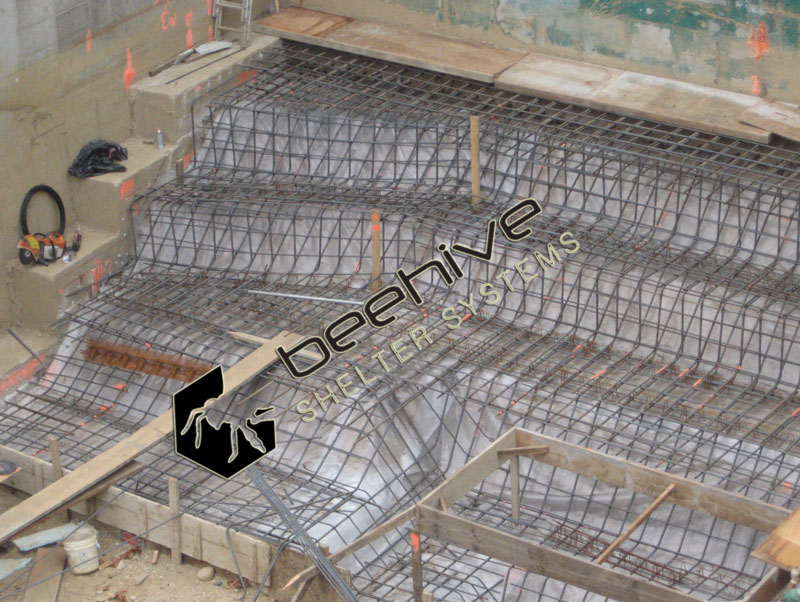 Our experience has taught us three guiding principles in BUNKER engineering that are the underlying foundation to our successful projects:

1) Keep it STRONG: This is a self evident aspect of BUNKERs.  The very nature of there purpose is to withstand extreme conditions of blast, radiation, chemical, biological, ground movement, corrosion, and many other issues intent on destroying there function.  When you look at differing types of BUNKERs in existence, pay attention to how strong they appear.  Ask yourself if the materials, means and methods look like they could withstand severe conditions.  Every aspect of our BUNKERs are designed with large safety factors built in to withstand all extreme conditions.  Strength is the underlying foundation to a well engineered BUNKER.

2) Keep it SIMPLE:  This issue is where almost all other BUNKER engineers fail.  Some of todays BUNKERs are designed with the “James Bond 007” mentality.  There is a real push to re-create a high tech “Eagle Eye” all inclusive technology system that gives the owner the apperance that they are in complete control of their environment.  In reality these high tech systems are not designed for this purpose and the sensitive electronics inevitably will fail during an event.  During situations of extreme stress and pressure the last item you want to be worrying about is figuring out why your high tech equipment does not work.  Our strategy is to keep everything as simple and straight forward as possible so that when the event happens you can focus on the real life preservation issues and not on technology.  We incorporate technology where needed but we insure that the client is NOT relying on technology to keep them SAFE and PROTECTED.  “Safety comes from strength and simplicity”!

3) Focus on the DETAILS:  There is a saying in the engineering industry that “the devil is in the details”.  This could not be more true than in BUNKER design.  We go to great lengths to work through ALL aspects of the project from large “blast slabs” to small “tie down connections”, knowing that both the structure and your systems need to survive the event. 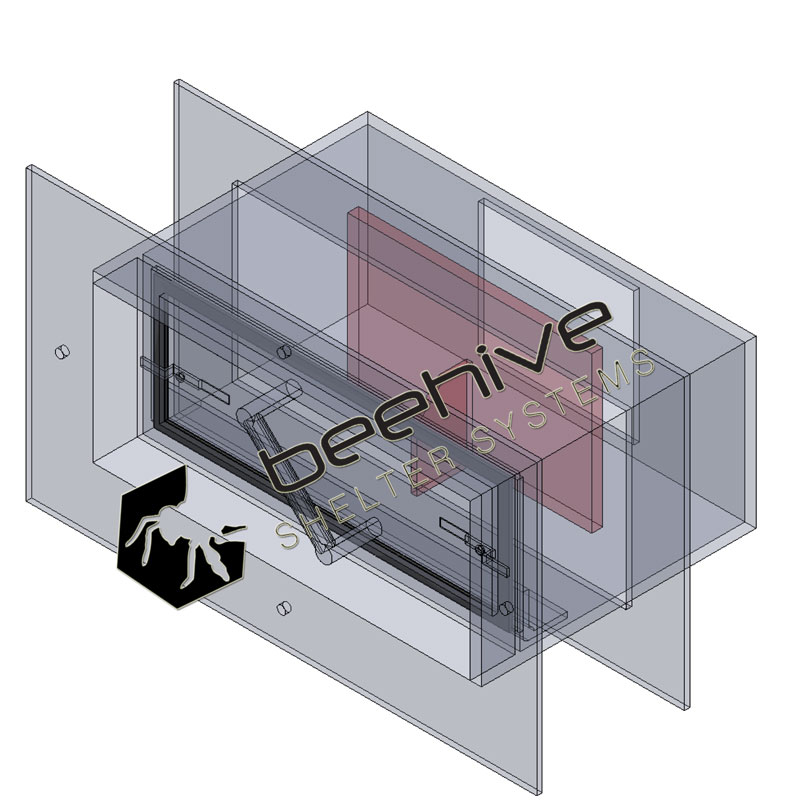 Our company has an in-house product designer who works to develop new and innovative ways to accomplish our design objectives, and we personally direct the fabrication of these components to insure the highest level of accuracy, quality and satisfaction.  To some the details are an “after thought”, to us they are OUR CONSTANT FOCUS!

To summarize the facts listed above we promote a privately owned, covertly located concrete BUNKER that is strong, simple and well engineered in all details.  These facts and engineering philosophies have been gleaned over the years from countless projects and yes a few changes in direction.  BUNKER design for most is a new discipline but for our group we have been doing these projects for decades.  Experience is the key to your success.  Our group has been involved in some of the most challenging and all inclusive BUNKERS in the world.  Don’t allow your project to be a classroom for your engineer.  Experience is mission critical in BUNKER design.

© 2013 Beehive Shelter Systems, All rights reserved.
Back to Top